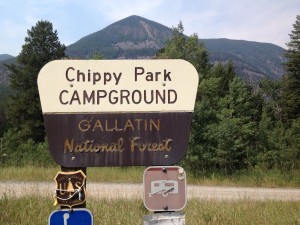 Every year we take a camping trip up the Boulder River Valley.  Along with a few other friends, we rent out the two tent campsites at Chippy Park and enjoy nature.  While the annual trip is normally in July, we had to push it back a month this year.

I worked a half day in the office on Friday, and raced home to finish packing (ok, to start packing).  After a frantic dash around the house making sure to get everything ready, and trying to keep Holden awake so he would nap in the car, we were ready to head out the door about 2 in the afternoon.  The drive to Big Timber was uneventful, as usual.  I did manage to forget some extra tent stakes and tie down cord, so a quick stop at the Fort was in order (how can you drive through Big Timber and not stop at the Fort?)  After grabbing supplies, we were back on the road, and 45 minutes later pulling into the campsite.

The worst part about camping at Chippy Park is that you can’t drive right up to the campsite.  So after around 57 trips to and from the car, all our gear was laid out and while Jessica took care of Holden, I set up the tent and got our portable cabin ready. 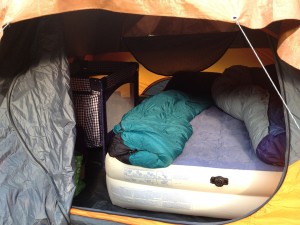 Ever since I was a teenager, I have loved camping and backpacking.  And I was all about going to extremes, which meant I would take bare minimal gear in order to be as light as possible.  However, car camping (something that I did a little of growing up, but not as much as I did backpacking) is a whole different game.  Throw a baby into the mix, and it is more of glamping than it is camping.  So a tent that is big enough for a queen sized air mattress as well as a pack’n’play is basically a necessity now.  While I do admit that it is nice to sleep on a 12 inch thick air mattress, it is a far cry from the 1 inch Thermarest that I am used to.

The best part about car camping, on the other hand, is that you can bring some more luxurious dining items.

The weekend was filled with a lot of uneventful events.  There was some eating, a little sitting and reading, some poking at the fire, and just a small bit of fishing.  On Saturday afternoon we walked up the road to the next picnic spot.  At this particular bend in the river the water is deep and running a bit slower than down near Chippy Park.  From on the shore you can see the fish, and there are quite a few in there that have some nice size to them.  However on this particular day the fishing, something that I look forward to every time I go to the mountains, was not the best.  And it was just about the worst.  I didn’t have any worms, which I like to take because you can just about always pull a fish or two out of the water with worms.  Instead I tried spinners, twisters, and jigs.  I got one strike, but the fish didn’t latch on.  So on the positive side I had one strike and could see the fish, but the big negative is that they weren’t biting enough to land any.

The rest of the day consisted of napping in a chair while listening to the river.  After a nice nap we roasted bratwursts over an open flame, and swapped manly stories around the fire (by manly I mean we talked about babies). 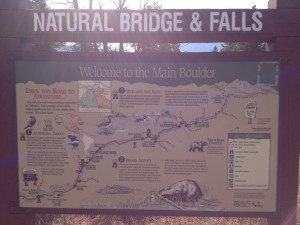 Sunday rolled around sooner than anyone had hoped, and after packing up camp (which took another 57 trips to and from the car) we rolled down to the Natural Bridge Falls area.  I wanted to hike down to the bottom of the falls to fish the deep pool of water, but the hike is a little too hard to do with a baby on your back.  Instead we admired the views, and then walked back to the picnic area to eat lunch.  We played for a while until the afternoon nap time rolled around, and then we headed back to Billings. 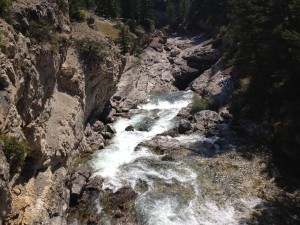 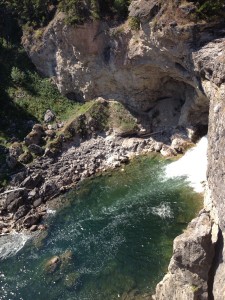 Ok, so this weekend wasn’t quite an adventure like I generally like to have.  My ideal weekend is throwing 40 pounds worth of gear into a backpack and finding some obscure lake somewhere in the mountains.  But not every weekend can be so extreme, and some adventures need to be a little more relaxing than others.  On the bright side, going back to work on Monday morning won’t be causing me to limp down the hallway due to huge blisters, sore muscles, and stubbed toes.