Life is All about Improving 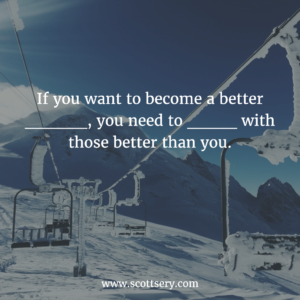 Back when I was in high school, I used to go downhill skiing every single weekend that the mountain was open.  For 4 years I would save my money so that I could buy a season pass (it wasn’t all that hard, there was one year that passes were a mere $99), and that was my leisure of choice.  I would generally rack up about 30 days on the slopes every season; most of them with a friend that had similar interest in the sport.

One day while heading up the lift, he said something that stood out to me.  Something that comes to mind quite often, and later in life I realized it applied to more than just skiing.  His sage advice wasn’t really all that profound, but it became that way as I pondered it.

“If you want to become a better skier, you have to ski with those better than you.”

Following those Better than You

The problem I ran into was that when skiing, we didn’t really have anyone better than ourselves that we could follow.  That’s not to say we were expert skiers, but among our circle, we were at the upper level.  There were a few people that I loved skiing with and their abilities were quite a bit above ours.  When I had the chance to ski with them, I noticed that within a day my technique improved.

As a high schooler that was skiing for the fun of it, and not to become a superstar athlete, it wasn’t a real big deal if I had plateaued and my technique was no longer improving.  If I truly was intent on getting better, I would have found others that could help me grow in the sport.

Growing with those Better than You

As an adult that runs my own business, I see the importance of this even more.  I can gather the basics on my own, and a lot of typical business related “stuff” I can find online.  But if I want to get some detailed tips and techniques, then I need to follow those who are better than me.

What that means is finding a mentor (or two, or three).  A mentor can help grow the business, answer the questions that really don’t have answers, and will let you bounce ideas off of him or her.  But it goes a lot deeper than that.  Rather that re-create the wheel, take a look at this post I wrote for Big Sky Collision Center’s site about why you need a mentor.

If you hang around those better than you, then you eventually become better yourself.

When you are skiing, you notice those around you skiing.  So if you want to become better, you simply have to watch for those that look great, and then ski with them.  The same goes when you are in business, but sometimes it’s a little harder to find those better than you.  There are two ways to find those mentors:

Join a networking group – I’m a member of Biz to Biz.  It has helped me grow my business by bringing in new clients, but it has also helped grow things immensely through leadership training, mentor training, and providing me with contacts to different businesses in different stages of their growth.

Invite them on a lunch date – Find a business that you admire, track down the leadership, and invite them to lunch.  Everyone needs to eat, and most won’t turn down a chance to have lunch with an upcoming protégé.  Take it a bit further and never eat alone, those lunches are the best $20 you will ever spend.

Who do you ski with?