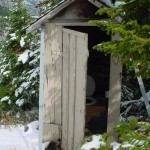 I pee in the shower. When I shower that is. My reason is more for a time saver rather than a method of saving water. But that is not to diminish the idea that peeing in the shower can help save millions of gallons of water each year. This simple act is an easy way that millions of people could help fulfill their part in “going green” and helping to conserve water. It’s a wonder that more people don’t actually do it.

Toilet Flushing in the United States

Everybody has to use the bathroom at least a few times each day. The only way to combat that is to go pee outside. It’s a real option, but most people don’t want to run out and squat next to a bush every time they had one too many cups of coffee. Besides, it would really start to stink after a while.

Instead, we head to the bathroom and give our offering to our porcelain friend. Since 1992 toilets have been regulated to use 1.6 gallons per flush. While this sounds like a lot of water, it’s a far cry from previous toilets that used as much as 7 gallons per flush. I honestly don’t know how older toilets used that much, since the water tank only holds about a quarter of that amount.

While each flush is not a considerable amount of water, consider this. There are currently about 315 million people who live in the United States. Each one of them uses the toilet several times per day. That means every time the population flushes, 504 million gallons of water are washed down the drain. Suppose everyone goes, on average, 5 times each day that is a little over 2.5 billion gallons of water used.

Peeing in the Shower

Out of the 315 million people living in the US, around three quarters of them are adults. Suppose half the adults shower on a daily basis, which means there are about 118 million showers taken each day. If everybody peed in the shower, that would reduce the daily water use across the country by about 188 million gallons of water due to one less flush per person.

Now it is a little difficult to grasp exactly how much water that is. So here are some examples of large quantities of water:

So consider this. If everyone who showered would pee in the shower, it would save enough water to fill over 5,000 garages. Enough to fill 284 Olympic sized swimming pools. Enough to fill the Empire State Building more than 2/3 of the way to the top. Each, and every, day.

Now I’m all for a clean bathroom. But for some reason we have come to the idea that any time something goes into the toilet, even if it’s a tissue after blowing our nose, we have to flush it away. I’m not sure where this idea got started, but it’s a huge waste of water.

Water Use in L.A.

Currently California is in the midst of one of the worst droughts in history. This drought is affecting everyone across the country as the area farmers have less and less water to grow their crops. Fewer crops grown in California means that there are fewer that make their way to our tables regardless of where we live.

Based on the water savings listed above that we can get by peeing in the shower, and by skipping a flush, the US would save enough water to supply about 21% of LA’s daily water use. If every person would shorten their shower by just 1 minute, that would increase to about 30% of their use, or about 989 million gallons of water.

Conserving water isn’t really about “going green.” It’s not about environmentalism, or about jumping on the climate change bandwagon. Conserving water is about making sure our rivers last the next 30 years for us to float on, fish in, take pictures of, and overall just enjoy them. Conserving water is one of the easiest things to do, and it saves you money. Yet most people seem to think that it’s someone else’s problem. We like to point fingers at the corporations that use vast amounts of water to make their products. It’s easier to say “hey look, they could save 100,000 gallons every week by making this change.” Instead, if everyone did a little, the impacts are huge. Want to see how much of a change it could make? Go to the Yellowstone River near Billings, Montana and watch the river flow for 6 hours. That much water could be saved each day with these simple changes.

But peeing in the shower is gross right? Not really, the pee ends up in the same place in the end.   It’s all pipes.