Every year around the Easter Holiday, we like to take a trip.  Generally we head out of state, somewhere in the south and quite warm.  For instance, last year we went down to Orlando and the year before that was a trip to San Diego.  They’re great, but airfare and hotel costs add up quickly.  This year, we decided to stay in Montana but go somewhere warm.

After researching pretty much every hot spring location in the state (and some outside of Montana), we decided to hit up Fairmont Hot Springs outside of Anaconda, MT.  It was only about a 3.5 hour drive (assuming no snow on the mountain passes), and it was quite frankly the nicest looking hot spring around.  Surprisingly not many of the hot springs have been developed into bigger resorts.

Here is our experience, and where you may want to look into if you decide to go to Fairmont.

Jump to a section if that’s your thing:

Drive and Lunch at Mountains Walking

We planned the trip so that we would get to Bozeman around lunch time.  This would get us a little over halfway to our destination, and travelling with a 5 year old frequent breaks are good.  When driving anywhere, uneventful trips are always nice.

We got into Bozeman about 11am, and had decided to eat at Mountains Walking Brewery.  I had recently written about the establishment in an issue of 406 Hops Brewing News, and wanted to check out the food and beer.  Even though they opened at 11:30, and we showed up at 11:15, we were able to sit at a table and wait until they were officially open.

Perk #1: There is an entire area dedicated to children at the brewery.  It’s tucked away from the hustle and bustle, and is filled with games and even a retro Pacman console.  A definite perk for any parent that wants to get out, but has short attention spanned children.

Perk #2: Build your own flights.  There were a bunch of great beers on the menu, but I couldn’t pick just one.  Not uncommon, but when visiting somewhere that I won’t be able to frequent, it’s nice to be able to try multiple beers without getting schnockered.

The service was great, the beers were delightful, but the food didn’t quite live up to what I expected.  It wasn’t bad, but there’s definite room for improvement.

We took the trip with another family; they have a 5 year old daughter.  When researching rooms we found two nights would cost us $400 per family.  That’s a lot considering the online reviews for the Fairmont Hotel left a lot to be desired.  Instead, we checked vacation rentals and we were very glad that we did.  For $400 total we rented a house in downtown Anaconda that was packed with historic charm, had plenty of space, and was amazingly comfortable.

Based loosely on the history of the area, the house is likely around 100 years old.  The owners purchased it and spent 2 years restoring it; not remodeling, but actually restoring it to its historic charm.  The result is hardwood floors, built up molding and trim, antique furniture, and a really cool place to stay.

To really do it justice, take a look at the pictures on the VRBO site.

It was finally time to hit up the pool!  We had read about it, and now it was our chance to experience it.  Rolling up from the Anaconda side you actually end up parking around back.  This meant trying to meander our way through the hotel and convention center trying to figure out how to access the pool.  To avoid our confusion, make sure you park in the lot on the south side of the resort (access is right on the bend in the road).  Our conundrum meant children saw the pool and slide, but then had to wait even longer before we could go in.

The resort has 4 pools: two inside and two outside.  In each area there is a warm pool and a hot pool (they don’t call it a hot tub, although that’s what it is).  When you get a little too hot for the hot tub, you can dip into the warm tub.  We found that despite the cold temperatures outside (in the 20’s) even the warm tub was enough to keep you from getting cold as long as you stayed sufficiently submerged.  However, it was nice to lounge inside where you would be out of the wind.  If you go in the summer, that would be totally different.

The waterslide looked impressive from the outside.  It’s 350 feet of enclosed winding tube that you access from inside, but dump into the outside pool.  And it is pretty fun to ride down.  The only problem was that there is just one slide.  And the lines get long.  That means you stand in line for 10 minutes in order to do a 30 second slide.  The kids loved it; the adults weren’t quite as thrilled.  To top it off, the tower was a bit on the dirty side and all that water gave it a musty smell. 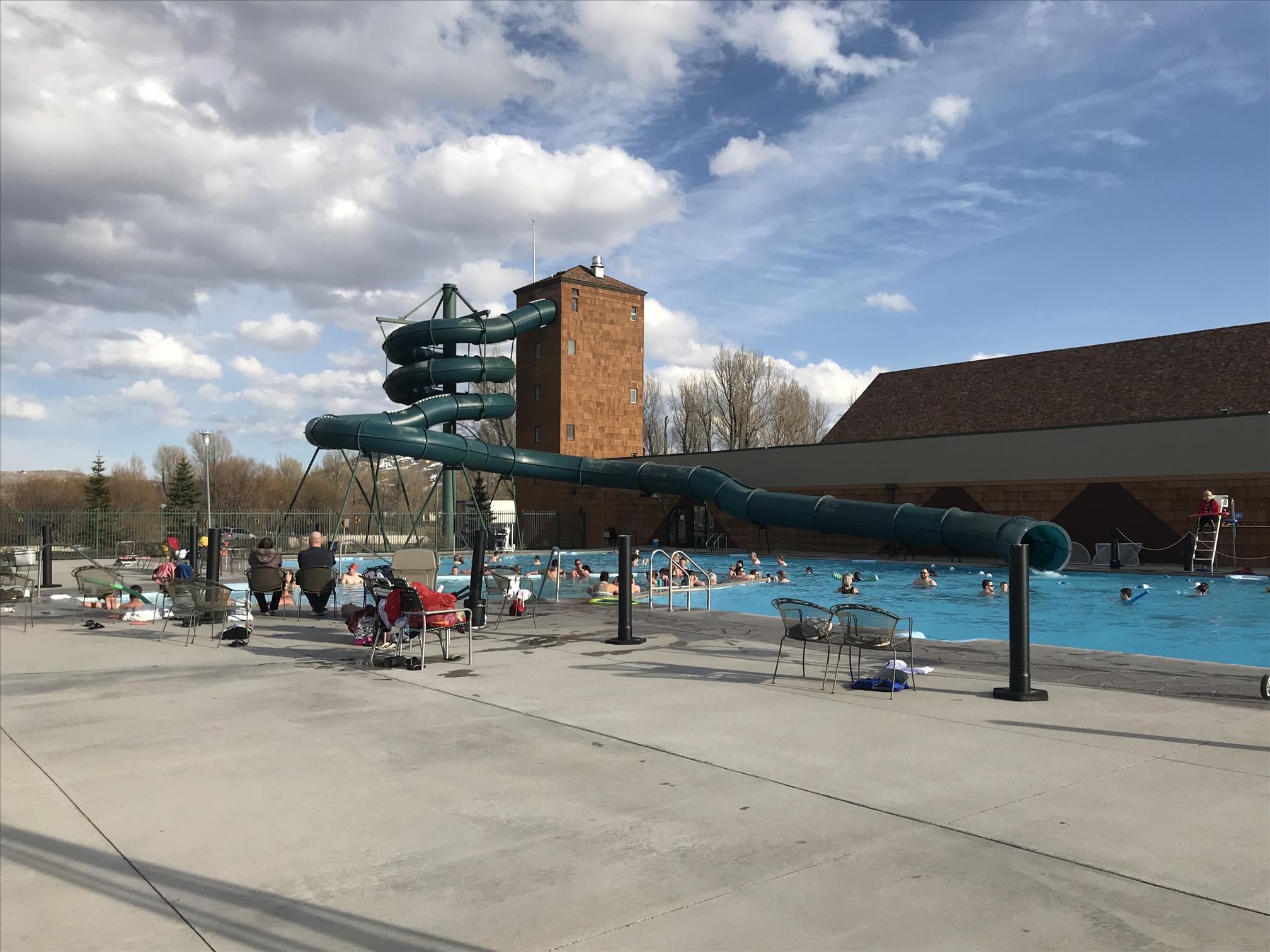 The inside pool rooms appear to have been recently remodeled.  And they’re quite nice for the most part.  There are a couple details that are hard to overlook.  First, the changing rooms were lackluster.  It’s hard to expect much from an area that is constantly wet (guests at the hotel can access the pool 24 hours a day), but the rough cut cedar on the stalls was a little odd.  The other big issue was that while most of the area was nice, around the edge of the pool was carpeted.  Whose idea was it to make an area that was heavily trafficked by wet feet covered in carpet?

First, the pool side bar doesn’t open until about 5pm (in the restaurant area it opens a little earlier).  At the pool side you will pay an extra $1 per drink, presumably for the convenience of not having to shiver your way down the hall.  Pool side the beers were nice and cold; at the bar they were barely chilled and maybe not at all.  Problem solved by ordering Bloody Marys.

The verdict: don’t waste the money on a waterslide pass for adults; buy beer poolside and mixed drinks at the bar.

Places to Eat in Anaconda: Donivans

Spending an afternoon swimming and water can tend to make one a bit hungry.  And what better to satisfy that hunger than a nice hamburger?  Not knowing what was in the area, we turned to Google for suggestions.

There were a few hamburger places that popped up.  One was called the Locker Room, and it wasn’t far from the VRBO that we had rented.  It wasn’t the nicest looking place, but the price was right and the food looked pretty good.  Getting the kids settled, I headed down to pick up food for all.

The Locker Room was closed.  In fact, it looked like it was closed for good.  A peek inside the windows showed that it didn’t appear to have been used for a while.  I quickly looked and discovered another place, one with what appeared to be American food, was less than a block away.

Donivans is set in a historic looking building.  It wasn’t too busy when I walked in, but I didn’t care too much about how busy since I was getting everything to go.  The friendly hostess took the simple order, 5 cheeseburgers with fries, and I waited at the bar.  A short wait later and everything was ready.

The food was great, having a relaxing house to return to where we could eat at our leisure (while watching the Netflix provided by the host family) solidified that vacation rentals are truly the way to go.

The verdict: Donivans is a charming restaurant with good food.

The second day of the trip was cooler with a bit of snow on the ground.  This made the pool all the more exciting.  With the cold temperatures, and the warm water flowing past, the area was enshrouded in steam.  It was fun to look at and to watch, but the weather was almost a little too cold to enjoy the outdoor pools.

Instead of basking in the steamy water outside, we spent most of the day inside enjoying the hot tub and the hot pool.  The kids, however, didn’t seem to mind as much and were comfortable going down the water slide over and over despite it dumping into the outside pool.

The wait staff was friendly.  The food wasn’t that great.  My pork chop sandwich was dry and tough.  Everyone else’s was a little better, but still wasn’t the best.  With few other options around, you may be stuck with Springwater Café.

The verdict: Springwater Café is ok for convenience, but not the best.

After a long afternoon of swimming, it was time to call it quits for the day to rest and relax before sleeping.  We decided that Italian food was the way to go.

Right at the split, there are few buildings that seem out-of-place.  As though they were last minute additions, but didn’t really fit in that small wedge of land.  One of those buildings houses O’bella! Italian restaurant.

Despite the odd location (more parking on the West side of the building than on the East), we were able to order our food, and then head back to the vacation house.  Keith stayed behind to courier all the food home.

While driving back to the house, we drove past Smelter City Brewing.  Of course you can’t visit any town in Montana (or anywhere else for that matter) without checking out the local craft brew scene!  I was dropped off at the brewery.

There was live music going on, an art gallery attached to the tap room, the merchandise was sold out of an old vault, and there was even a section for kids.  The place was hopping!  It’s too bad we didn’t have more time to hang out there and enjoy a few brews.

I ordered a growler, and then hoofed it back to the house where we had dinner.

The verdict: Plan to spend some time at Smelter City Brewing

Our final day was Easter Sunday.  Since we had a 4-5 hour drive back to Billings, we opted not to swim this day.  Instead, we enjoyed Easter Brunch hosted by Fairmont Hot Springs.

Fairmont has a large convention center.  It’s a place many companies will go to have their annual meetings.  It’s relaxing, there’s a golf course if you’re into that sort of thing.  Pools, and mountains.  The convention center makes a great place where you can host a huge brunch too.

It was on the pricier side, about $40 per adult.  But it was well worth it.  Food tables wrapped through the center hallway and into both large meeting rooms.  There was smoked salmon, prime rib, amazing deserts, seafood, land food, and just about anything else you could imagine.  The bar was on hand to make mixed drinks for those who needed an Easter morning mimosa or bloody mary.

The verdict: Easter brunch at Fairmont is wonderful.

We decided that while traveling across the country is a great way to spend the Easter break, airfare gets expensive quickly.  Instead, our future plans may just be to spend each Easter back at Fairmont Hot Springs enjoying the pool, a wonderfully renovated VRBO, and a delicious Easter Morning brunch.